About Us
|
Our Staff
|
Why Choose Us
|
Testimonials
|
Contact Us
|
Photos

Gerald Jackman is the third generation to operate Jackman Funeral Service with locations in Whitinsville and Douglas, as well as the Tancrell-Jackman Funeral Home in Uxbridge. Together we are continuing a nearly 80-year old family tradition of providing caring, personal service to people at one of the most difficult times in their lives.

Jerry's grandfather, Gerald E. Jackman Jr., started the business in 1932. Mary Jackman had been a nurse at the Whitin Machine Works in Whitinsville, but also helped out with the funeral business. When his grandfather died in 1949, Jerry's father, Gerald III, came home to work in the business. When Gerald was drafted to service in the armed forces during the Korean War, Mary ran the funeral home on her own. Her young son, Joseph was still too young to run the business.

Today, Jerry works with a deep sense of obligation to the business and to the community, instilled in him by his parents and grandparents.

"The most difficult time to plan for a funeral is at the time of death of a family member, preplanning a service can offer a sense of peace and financial assurance." 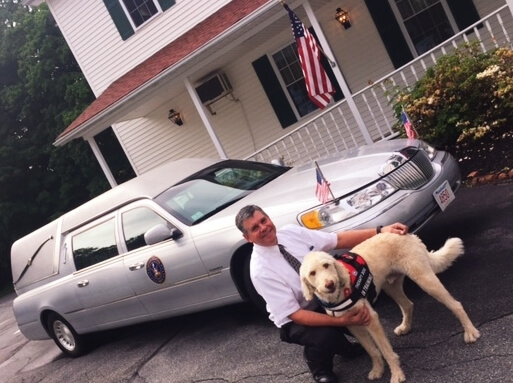 We are happy to announce the newest member of our care team.. Meet Finn!

Finn is a 9 year old hypoallergenic, Labradoodle and aside from being Jerry’s at home pet he is now our Funeral Home Grief Therapy Dog in Training. In difficult times we can all appreciate some extra affection, and we at Jackman Funeral Homes provide just that with Finn. He loves to provide special attention to family members to relax them and help ease their pain. Finn, is loving his new job here and also greatly enjoys making visits around the community to nursing homes spreading warmth and joy to those he meets.

About Us
Our Staff
Why Choose Us
Testimonials
Contact Us
Photos